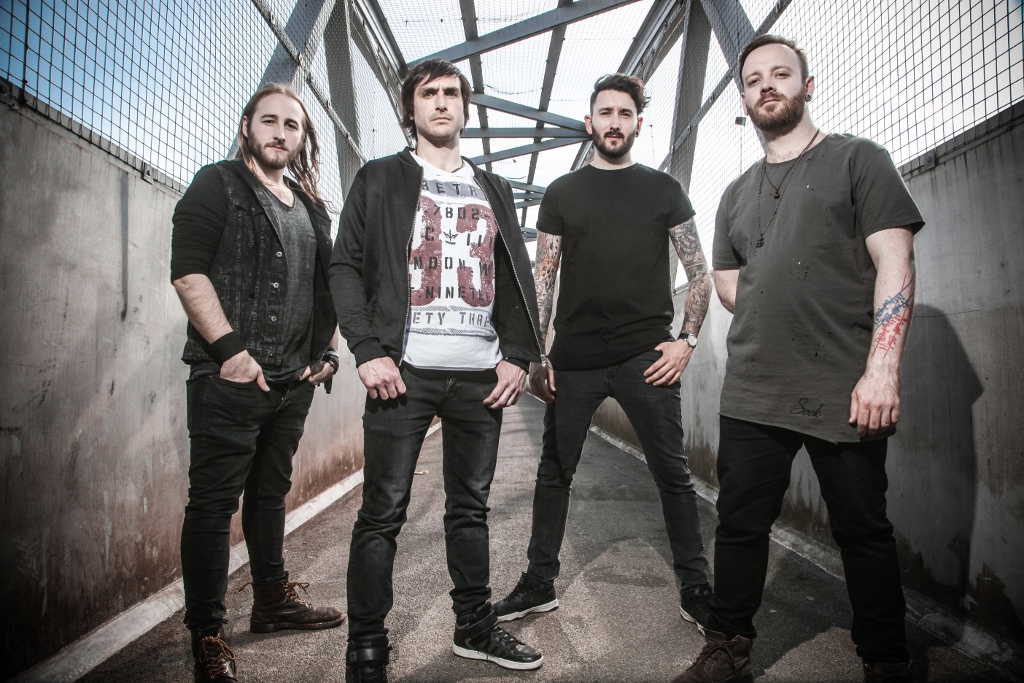 Whilst individually submerged somewhere in the underground rock scene, they found each other through sharing the same passion, drive and commitment to music. With an energetic live performance, they endeavour to make every single person feel like they are a part of the show. With the focus remaining on the song itself, the band combine big riffs, powerful grooves, catchy vocal lines and sing along choruses. The result is a melodic style of rock with plenty of attitude.

The band have recorded two EP’s so far, debuting with a self-released 5 track called Blueprint. Their second EP, another 5 track is called ‘100 Ways’ was recorded at the legendary Rockfield Studios in Wales, where bands such as Queen have recorded hit singles like Bohemian Rhapsody. Produced by Romesh Dodangoda (Funeral For A Friend, The Blackout, Kids In Glass Houses) the 100 ways EP was released early 2015 to rave reviews. Since then the band has gone on to play at major festivals and have been chosen to support the likes of Mallory Knox, We Are The Ocean, Fort Hope, The Subways, Lonely The Brave, Hawthorne Heights, Crazy Town, Terrorvision and Yashin, Go Primitive are hungry for more. Fuelled by their relentless ambition and desire to create exciting new music, the band are now eager to charge forward with a full length album which is being penned for release early 2017. 2016 saw Go Primitive play their biggest show to date! The band were invited by BBC introducing to play at the world renowned Glastonbury Festival. With a blistering live performance to a packed out tent they certainly impressed, so much so they were showcased on the ‘red button’ feature on BBC 2 during the festival’s TV highlights. The band have also picked up support from Scuzz TV with regular airplay of the band’s single ‘In a Band’.

Go Primitive are making a big noise in the industry with airplay from major national and international radio stations. Plays on Radio one, Kerrang Radio, and BBC 6 Music to name a few. With Rage PR and Fairbanks Endorsements already backing them, they look to expand on their team as they pursue their goals. Armed with their relentless drive and passion Go Primitive are thriving on the momentum they have built up for themselves as they continue to push forward to see where this journey will take them.

‘I’m that special kind of guitarist that goes a bit nuts and sweats like no ones business. I’ve found that Rotosounds have been the strings that can cope best with our low tunings and how hard i hit them staying fresher for longer giving me the clarity i need.’ – Adam

‘I started experimenting with different string gauges and manufactures, and I asked my good friend Sam Coulson (a Rotosound artist) what strings he used. He suggested I try some Rotosound strings, and as I play drop tunings I tried some R11 rotoreds. I’ve been really happy with the sound and quality of these strings and they feel great to play, so I never looked back!’ – Tomm