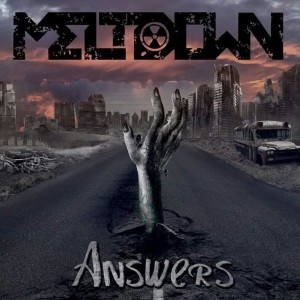 Formed in June 2012, wrote loads of new songs and gigged in the area with a good following. Released the debut album “Answers” late 2015 – after a single release. The album was re-mixed, re-mastered and re-released February 2016 to great reviews.

“It features eight hard-hitting, bone-crushing songs that will place Meltdown as one of the premier underground heavy metal bands in Europe” – JPSmusicblog.

“The title track “Answers” is a typical track from the eight-featured cuts here, with the superb blending of clean and dirty vocals and muscle bruising guitars mixed in with the more melodic playing.” – ExplicitlyIntense

Have plenty of support and headline gigs ahead of them in Norway and Sweden the coming months. Will feature on a full split-album release on vinyl only before the summer.